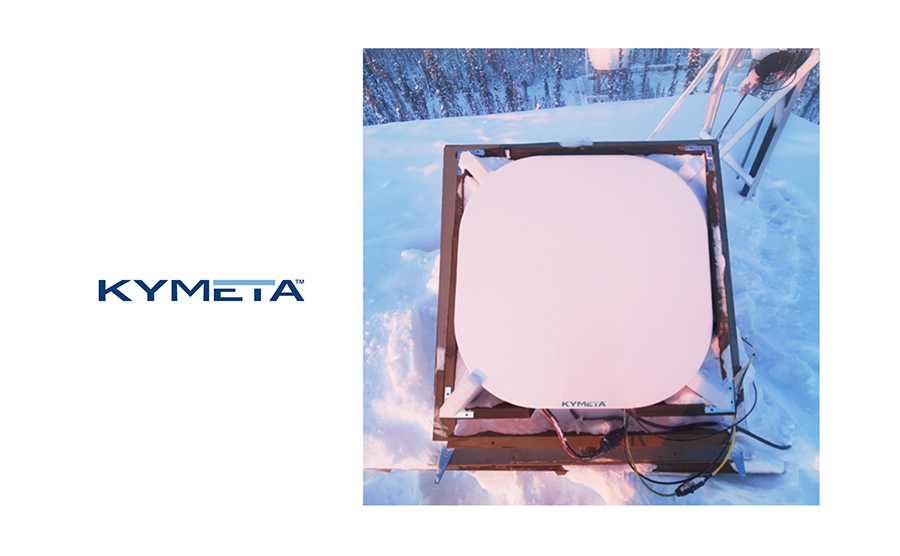 In 2020, Kepler was selected for an extended u8 beta trial to capture the extended Northern winter in Inuvik, Canada. Frequent revisit times from the Kepler LEO satellites combined with the local environment of unprotected cold weather, snow, and ice provided a unique testing opportunity for the latest Kymeta technology. Results have demonstrated a significant increase in performance with lower latency, enhanced look angles and speeds that are approaching 10X faster than earlier products with higher throughput and total data passed.

The u8 system is designed to work down to -40oC. During testing, Kymeta and Kepler were able to update software facilitating the testing of new algorithms in real time. Updates included capabilities of on-board FPGA-based tracking receivers, which allowed for usage of channels more than 2 times larger than previous demonstrations.

Testing results exceeded expectations during these cold weather trials with average uplink and downlink speeds of 100 Mbps, providing the ability to transfer more than two Gigabytes of data with each pass.  Initial testing was completed using linear polarization on the u8 – in a future software upgrade the addition of circular polarization support will lead to additional increases in data transfer speeds.

“Kepler has been a great trial partner because they are agile and able to make adjustments for optimized performance at the same time, we are adjusting the u8 terminal,” David Harrower, Senior Vice President of Global Sales at Kymeta. “Many of our customers are interested in compatibility with LEO satellite services, and this testing helps ensure the longevity of the u8 and Kymeta Connect as well as offer a solution that takes advantage of the increased utility of LEO satellites.”

“The performance of the Kymeta u8 with Kepler’s Global Data Service has exceeded our expectations.” said Wen Cheng Chong, Kepler’s CTO and Co-Founder. “Our recent testing and development efforts demonstrated not only the ability to move many more gigabytes of data than expected with each pass, but also the u8’s ability to operate in polar environments, where many of Kepler’s early adopters operate. With Kepler’s recently increased capacity the u8 can serve customers globally, pole-to-pole and all points in between.”

In January, Kepler launched 8 new satellites via SpaceX’s first dedicated SmallSat Rideshare Program.  On March 22nd, Kepler launched an additional two satellites via the Soyuz-2,  expanding its active constellation to 15 satellites in total.  An additional launch is planned for  June. Kymeta believes the collaboration with Kepler and further testing is instrumental to providing reliable connectivity and superior benefits to customers.

Kymeta next-generation solutions are built for mobility and designed specifically for the needs of global defense agencies, government, public safety, and commercial customers. Through the launch of the u8 and Kymeta Connect, the company has meaningfully increased antenna throughput and reduced the total cost of ownership. Its products offer a breakthrough in performance, ease of use, and hybrid satellite-cellular connectivity services.

Kymeta is unlocking the potential of broadband satellite connectivity, combined with cellular networks, to satisfy the overwhelming demand for comms on the move and making mobile global. Lepton Global Solutions, a Kymeta company, hosts the company’s satellite connectivity solutions and offers unique, complete, and turnkey bundled solutions to the market based on best-in-class technologies and tailored customer-centric services that meet and exceed customer mission requirements. These solutions in tandem with the company’s flat-panel satellite antenna, the first of its kind, and Kymeta Connect™ services provide revolutionary mobile connectivity on satellite and hybrid satellite-cellular networks to customers around the world. Backed by U.S. and international patents and licenses, the Kymeta terminal addresses the need for lightweight, slim, and high-throughput communication systems that do not require mechanical components to steer toward a satellite. Kymeta makes connecting easy – for any vehicle, vessel, or fixed platform.

Kymeta is a privately held company based in Redmond, Washington.

About Kepler Communications Inc
Kepler is a satellite telecommunications provider based in Canada, backed by Costanoa Ventures, IA Ventures and other leading investors. Kepler’s mission is to connect people and things Everywhere, on earth and beyond.  To this end, Kepler will build an in-space telecommunications network through an incremental deployment of products and technologies. The first to launch and operate a Ku-band satellite service in Low Earth Orbit, Kepler has expanded its capabilities with the successful commissioning of a cubesat production facility at their Toronto headquarters, from which the GEN 1 satellites are being delivered.